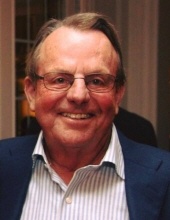 A service in celebration of Don’s life in the Resurrection of our Lord will be held on Wednesday, March 10th at 2 PM with family in attendance and all others invited to join via livestream at www.stpaulsepiscopal.com. Entombment will follow in the mausoleum at Pinewood Memorial Park. Viewing will be available Tuesday from 1 to 5 PM at Wilkerson Funeral Home.

A lifelong resident of Greenville, Don was born to the late Pauline Morris Wilkerson and Stephen Lindsay Wilkerson. He was a graduate of Greenville High School, class of 1958, and the University of North Carolina at Chapel Hill. He served in the United States Army.

For more than 40 years, Don worked in his family’s business, S. G. Wilkerson & Sons, Inc. as a Funeral Director, retiring in 2010. He greatly enjoyed working along with his uncles, cousins and valued staff in serving their community during times of loss. In the course of his career, he befriended many friends and colleagues within the funeral industry and was a founding member of the North Carolina Funeral Director’s Study Group, later renamed The Taylor Study group at the loss of another founding member and friend, Gary L. Taylor. His family remains active in this group today.

He was a childhood member of Immanuel Baptist Church and, later as an adult, was a member of Jarvis Memorial United Methodist Church. In addition, he and his wife, Kay, were married at St. Paul’s Episcopal Church and have remained faithful parishioners. As a dedicated member of Greenville Country Club, he served in many capacities and also was a member of Rotary International.

Those that knew and loved Don will remember his infectious laugh and accompanying smile. He had an incredible desire to know people and how they may be related to others, which greatly aided in his profession. He had an insatiable love for the game of golf and was fortunate enough to play in Scotland and Ireland as well as numerous other memorable trips with the finest of company. He and Kay also enjoyed traveling with dear friends in their pursuit and enjoyment of fine food and wine. He has always been an avid reader, and most days, engaged in Sudoku challenges.

Don deeply loved his family and was proud of each of his children and grandchildren. Most recently, he was blessed with the birth of his first great grandchild, Justin Kemp Bradshaw, II, whom shared his birthday of December 17. He was affectionately known as “Don-Don” to his grandchildren and others, and each will miss him in their own special way. He considered himself a blessed man, and will be forever missed by his family and a host of friends.