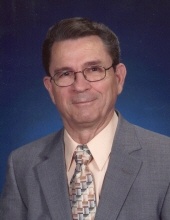 Jimmy was born in Wayne County on March 24, 1941 to the late Roland Elwood Hollowell and Elease McLaurin Hollowell. He proudly served his country in the United States Air Force. Jimmy was a hard-working man, which was the theme of his life, he lived to work. He was a valued employee of National Welders where he was serving as the District Manager of the Goldsboro Division when he retired in 2010 after over 40 years of service.

Jimmy was a longtime member of Pikes Crossroads Pentecostal Holiness Church in Pikeville. He was devoted to his church, served as a deacon, was the church treasurer for over 20 years, taught Sunday school, and was involved in many other church ministries where he utilized his gifts and abilities to share the love of God. Jimmy always had a heart for the children and for that reason he served many years on the conference board for Falcon Children’s Home and was a strong supporter of the Royal Home Ministries.

Jimmy was an unusually fine man. He was adored by his family, for whom he was a source of strength, but also by countless others, from old friends to new acquaintances, all of whom were struck by his quiet generosity, his kind and unassuming intelligence, and his innate courteousness. He cherished his wife and was always concerned about her well-being. Jimmy loved his daughters and would often spoil them but he will be remembered as a role model for his grandchildren.

A graveside service for family and close friends will be held on Wednesday, April 22, 2020, at Evergreen Memorial Cemetery with Rev. Bill Rose officiating.

Jimmy is survived by his wife of almost 55 years, Margaret Peedin Hollowell; daughters, Renee H. Taylor and husband Brian of Goldsboro and Michelle H. Casey and husband Paul of Goldsboro; grandchildren, Reagan Brielle Taylor, Ethan Seth Taylor, James Nolan Casey and Benjamin Payne Casey; and brothers, Bryson Hollowell and wife Becky of Alabama and George Hollowell of Hickory. He is also survived by several cousins, nieces and nephews that he loved very much.

The family would like to express their appreciation for the compassionate care provided by Community Home Care and Hospice. They would also like to extend special appreciation to Crystal Sutton who provided Hospice care allowing Jimmy to be at home. Love and heartfelt thanks is also expressed to Melissa Weaver and her caregivers who were not only caregivers but also his special friends.

In lieu of flowers, the family suggests memorials be given in his memory to Falcon Children’s Home, 7569 N. West Street, Falcon, NC 28342.

Online condolences may be sent to the family at www.seymourfuneralhome.com.