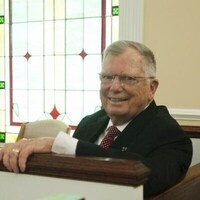 Larry Dean Morrison, 75, of Beck’s Nursery Road, and co-owner of Davidson and Piedmont Funeral Homes, went to be with his Lord and Savior on Saturday, August 22 at his home surrounded by his loving family.

A funeral service will be held at 11 am on Wednesday, August 26 at First Baptist Church of Welcome, by the Revs. Jonathan Goodman, Mark Blair, Jason Koontz and Sandy Young.  Burial will follow in the church cemetery.

Due to Covid restrictions, Mr. Morrison will lie in state from 5-8pm Tuesday at Davidson Funeral Home and the family will greet friends outside. Social Distancing and masks will be required.

He was born February 9, 1945 in Davidson County to Thurman Brady Morrison, Sr. and Doretha Roberts Morrison.  He began his career in funeral service as a teenager at Piedmont Funeral Home in Lexington, as an ambulance attendant.  He graduated from Guilford Technical Community College, and became the first licensed paramedic in Davidson County.  He later attended Gupton-Jones College of Funeral Service, where he was Valedictorian and Chaplain of Pi Sigma Eta.  He served countless families at Davidson Funeral Home for the next four decades, as Co-Owner, Corporate Secretary and General Manager.  He was instrumental in returning Piedmont Funeral Home to local ownership, where he served as President.  Larry was also active in the NC Funeral Directors Association, serving as District Director, and also serving as President of NC Cremation Association.

Mr. Morrison had a passion for the great outdoors and was an avid hunter.  He was the first Hunter Safety instructor in Davidson County.  His greatest enjoyment was spending time at his farm with his family.  In addition to his parents, he was preceded in death by his wife, Linda Gail Kepley Morrison, and his sister, Velma Morrison Craver.

In lieu of flowers, memorials should be made to Hospice of Davidson County, 200 Hospice Way, Lexington NC 27292, or to the donor’s choice.