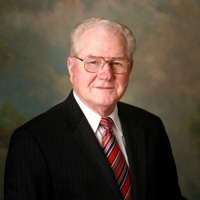 Mr. Parrish attended public school in Princeton and later graduated from Nahunta High School in Wayne County.  In 1946 he enlisted in the US Marine Corps and was honorably discharged as a corporal in 1948.
Following his discharge, he attended Gupton-Jones College of Mortuary Science in Nashville, Tenn. and graduated in 1951. While in school he married Geraldine Hartley on April 13, 1950. In 1953, Elton returned to Selma and joined the firm of Bailey Funeral Home as a licensed Embalmer and Funeral Director.  When Mr. Bailey retired in 1964, Mr. Parrish purchased the funeral home. In Dec. of 1970 he moved the business to its current location and the name was changed to Parrish Funeral Home.

Mr. Parrish was active in the civic and social life of the community.  He was a member of the Selma Lions Club, the Selma American Legion Post 141 and the Selma Fire Department.  He was also a two term Past Master of the Selma Masonic Lodge #320.  He served on the board of directors of Selma Housing Authority and the board of directors of KS Bank. In 2002, after years of dedicated community service, Mr. Parrish was named Selma’s distinguished citizen by the Greater Smithfield-Selma Chamber of Commerce.  Elton was a faithful member and former Deacon of Selma Original Free Will Baptist Church.

Mr. Parrish will lie in state at Parrish Funeral Home on Thursday, December 9th from 9:00 a.m. – 3:00 p.m., with the family present from 1:00 – 3:00 p.m. Funeral services will begin at 3:00 p.m. in the chapel with Rev. Terry Ellis and Rev. Dennis Pollock officiating. A private entombment will be held at a later date at Selma Memorial Gardens.

We will honor and remember our dad as an honest, hardworking and dedicated man. He truly found his calling in helping others during the loss of their loved ones. He taught us the importance of respect for people in life and in death.  He instilled in us the importance of compassion for our fellow man and passion for our community.  He was stern yet he had a big heart, he was successful but humble and most of all he was a loving husband, father and granddaddy.

We extend a special thanks to his caregiver and friend, Louise Barnes and the SECU Hospice Staff for helping us make his home stay comfortable and possible.  In lieu of flowers, memorial contributions can be made to Selma Original Free Will Baptist Church, PO Box 224, Selma, NC 27576 or Johnston Home Health Care - Hospice payable to Johnston Health Foundation, PO Box 1376, Smithfield, NC 27577.